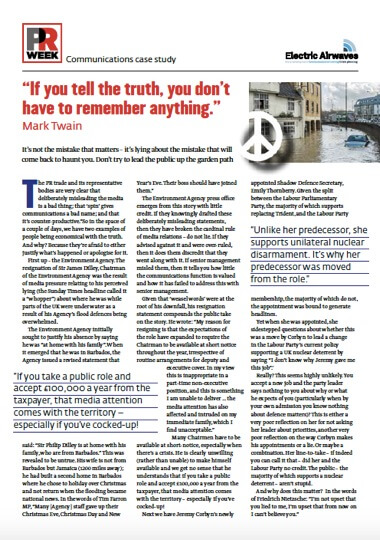 The PR trade and its representative bodies are very clear that deliberately misleading the media is a bad thing; that ‘spin’ gives communications a bad name; and that it’s counter-productive.”So in the space of a couple of days, we have two examples of people being economical with the truth. And why? Because they’re afraid to either justify what’s happened or apologise for it. First up – the Environment Agency. The resignation of Sir James Dilley, Chairman of the Environment Agency was the result of media pressure relating to his perceived lying (the Sunday Times headline called it a “whopper”) about where he was while parts of the UK were under water as a result of his Agency’s flood defences being overwhelmed.

Electric Airwaves is the leading provider of Media Training, Communications Skills Training and Crisis Communications Skill training. With the largest team of trainers, the deepest knowledge base and some of the world’s leading organisations as clients, we are well placed to help you manage your reputation – in good times and in bad.

Read more about our courses here:

Or contact us on team@electricairwaves.com to discuss your needs in detail.

Does it matter that Tesco had this selection of bad news headlines one day last week in national, trade and local press:

Perfect example of how to handle a difficult journalist question

Can Your Spokespeople Paint Pictures With Words?

In this week’s case study: the potential reputation pitfall in claiming to be an ethical company

Are you as positive about 2022 as our clients’ PROS?

We use cookies on our website to give you the most relevant experience by remembering your preferences and repeat visits. By clicking “Accept All”, you consent to the use of ALL the cookies. However, you may visit "Cookie Settings" to provide a controlled consent.
Cookie SettingsAccept All
Manage consent

This website uses cookies to improve your experience while you navigate through the website. Out of these, the cookies that are categorized as necessary are stored on your browser as they are essential for the working of basic functionalities of the website. We also use third-party cookies that help us analyze and understand how you use this website. These cookies will be stored in your browser only with your consent. You also have the option to opt-out of these cookies. But opting out of some of these cookies may affect your browsing experience.
Necessary Always Enabled
Necessary cookies are absolutely essential for the website to function properly. These cookies ensure basic functionalities and security features of the website, anonymously.
Functional
Functional cookies help to perform certain functionalities like sharing the content of the website on social media platforms, collect feedbacks, and other third-party features.
Performance
Performance cookies are used to understand and analyze the key performance indexes of the website which helps in delivering a better user experience for the visitors.
Analytics
Analytical cookies are used to understand how visitors interact with the website. These cookies help provide information on metrics the number of visitors, bounce rate, traffic source, etc.
Advertisement
Advertisement cookies are used to provide visitors with relevant ads and marketing campaigns. These cookies track visitors across websites and collect information to provide customized ads.
Others
Other uncategorized cookies are those that are being analyzed and have not been classified into a category as yet.
SAVE & ACCEPT
Scroll to Top